Bovine respiratory disease, the most common and costly disease in the beef industry, results from complex interactions between the host, the environment, and potential pathogens. Environmental stressors play a major role in susceptibility to and transmission of disease pathogens. This module describes cost-effective preventive management measures that reduce incidence of the disease and thus the need for antimicrobial treatment. Beef practitioners play an important role in promoting these preventive measures and reducing the unnecessary use of antibiotics.

This module aims to describe a preventive approach to the management of bovine respiratory disease, as well as the judicious use of antibiotics in treating this disease. By the end of this module, you will be able to:

Louis Anderson, DVM, specializing in food animal veterinary medicine, answers the telephone. Pat Johnson, a cow-calf producer, is requesting assistance with her cattle. Dr. Anderson tells Pat he is on his way. 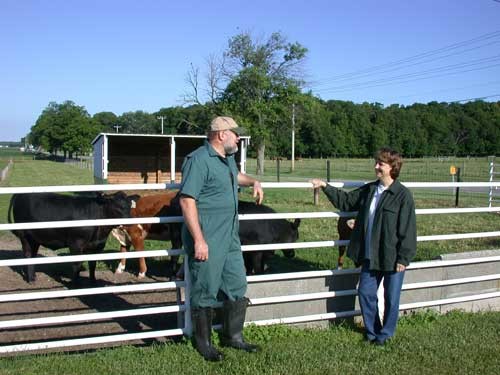 The Johnson farm is a small cow-calf operation. Pat Johnson has a mix of about 85 crossbred and purebred cows. The cows usually calve in April and May with some stragglers calving in June. Pat usually sells her calves in the fall to one of two nearby feedlots, but now the feedlots are reluctant to give her a good price for her calves. They claim that too many of them get bovine respiratory disease (BRD) once they get to the feedlot. This requires antibiotic treatment, and the cattle frequently do not gain weight as fast or efficiently as those that stay healthy. Having just read in the Farmers Daily Journal that BRD ("shipping fever") is caused by bacteria, Pat wants a prescription for the latest antibiotic to treat all her feeder calves before she sells them to the feedlot.

Pat says, “The feedlot says that about a third of my cattle need antibiotics for BRD once they get to the feedlot. When they treat a cow for BRD, the antibiotic only costs them about $31. If I treat them with antibiotics before they go to the feedlot, maybe I can prevent this BRD.”

Let’s dispel some of Pat’s misconceptions. The cost of medicines is only a fraction of the costs incurred when an animal gets BRD. One of the best and biggest studies was done in Texas, where they found that about 26% of cattle get BRD while at feedlots. The cost of the medication to treat sick animals was estimated at about $31 per animal. Other costs associated with BRD include increased death loss, increased feed cost per weight gained, and a lower-quality grade (more carcasses grading as "standard" and "select" rather than as "choice") compared to healthy cattle. All these costs added together showed that healthy steers had a $93 more favorable economic return compared to steers with BRD that required antibiotic treatment.

In addition, antibiotic treatments become ineffective if the organisms the antibiotics are supposed to kill become resistant to them. With increasing antibiotic resistance, it will eventually be necessary to switch to other, usually more expensive antibiotics, thereby increasing the direct costs for the feedlot

Dr. Anderson says, "BRD is a big problem in feedlots. Once cattle show signs of disease, much of the damage has already been done. It is better to prevent disease than to use antibiotics to cure animals after they are already sick. To move from treatment to prevention, we need to understand the many causes of BRD. There are many known viral and bacterial agents, but various types of stress also contribute."

What is a Backgrounder?

The backgrounder is a person who provides management services that many cow-calf producers omit, such as castrating, dehorning, and vaccinating. Backgrounders also consolidate calves from many different small producers, get them ready for feedlot, and merchandize them to feeders who demand a more uniform group of calves to put on feed.

Healthy cattle normally carry many bacterial and viral agents in their respiratory system. When stressed, their immune defenses are overwhelmed and BRD develops. Controlling these stresses is often the most cost-effective way to reduce disease, since stress and other disease precursors make the animal more susceptible to BRD. Many viral agents only produce mild clinical signs by themselves but can predispose the animal to bacterial infections when combined with stress. A good preconditioning program can help reduce the need for antibiotic treatment of BRD at the feedlot.

The risk of calves developing BRD when moved from a cow-calf operation will be reduced if the following preconditioning steps are followed.

Management procedures included in a good preconditioning program can help prevent BRD. This tends to be more cost-effective than antibiotic treatment of cattle that develop BRD. Additionally, the overuse of antibiotics will eventually foster antimicrobial resistance, which can negatively impact both animal and human health. 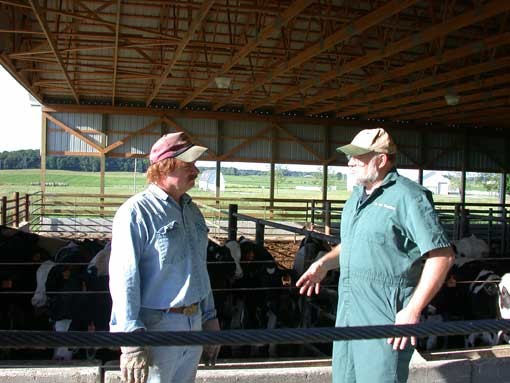 Dr. Anderson's next call was to one of the feedlots that was purchasing Pat's calves, which were developing BRD at the feedlot. Bill, the feedlot manager, asked Dr. Anderson to come down because the cattle had been having more problems lately with BRD.

Once calves arrive at the feedlot, Bill's approach for controlling BRD is to carefully observe the cattle for coughing and then give the coughing cattle a couple of antibiotic injections. Bill suspected that the antibiotic didn't cure whatever was causing the coughing, but he felt maybe it gave sick cattle a boost in fighting off the infection.

Early recognition of cattle with bovine respiratory disease:
Look and listen for a soft repetitive cough, watery dull eyes, and a clear nasal discharge. Sometimes affected cattle rapidly lick their nostrils, yet they appear to have a dirty nose. The membranes around the eyes and nostrils may be reddened. Sick cattle will also decrease the amount they eat and not be as aggressive at the bunk. Observe any cattle hanging behind the bunk after the feed wagon goes by or at the bunk without feed on their nose. Sick cattle may show hanging heads, a gaunt appearance, and hollow paralumbar fossa. 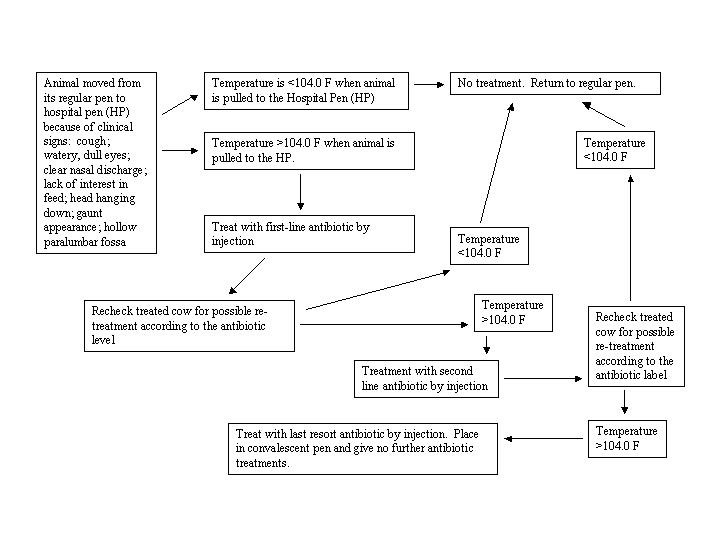 Before shipping calves from the cow-calf operation (or other source of cattle) to the feedlot:

The Cost of Bovine Respiratory Disease